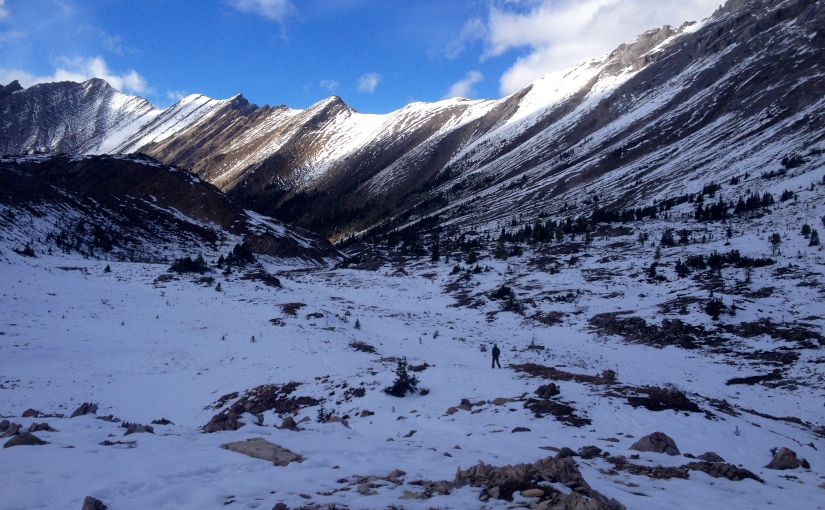 It’s not the mountains we conquer but ourselves.

Johnston Canyon is such a cool spot it deserves its own blog post.

On a sunny day last summer six of us decided to make a hike all the way to Mystic Pass. We were looking for a hike that day and I briefly read about this cool sounding place. The trail starts at the Johnston Canyon parking lot. Since no one had a better hiking idea my friends blindly trusted my suggestion and off we went. Let’s say preparation is always a very important part of the hike. I made myself one sandwich for the day and grabbed a snickers bar on the way out. We were already late and had some hiking to do. Little did we know we were embarking on a hike that is considered as a two day trip. The actual starting point is the Mt. Norquay Ski area that takes you all over Mystic Pass and ends at Johnston Canyon. Talking about poor planning skills.

A 30 minute car ride later we arrived at the parking lot. I must say, most people who start their hike from the parking lot hike only to the first point, the Lower Falls. This part of the hike is pretty easy and takes you along Johnston Creek all the way to the waterfall. If you have a little more time you can decide to make the climb to the Upper Falls for more viewpoints.

That wasn’t enough. We wanted to reach Mystic Pass that day, we carried on to our next viewpoint, the Ink Pots. My advice, don’t hike beyond the Upper Falls if you choose the Ink Pots as your turnaround point. It’s quite disappointing but the Moose Meadow next to it is a very nice spot to have your lunch along the river.

My friends asked me how much further this Mystic Pass was, I didn’t have an exact number in mind but told them convincingly it was going to be quite a hike still. Who knew I was so wrong with even being so vague. We had lunch and continued our trail. At that point nobody wanted to complain or whine about turning around, the most exciting part was still to come. We crossed the river over a log bridge and followed the signs to Mystic Pass. We saw some bear paws in the mud on our way so make sure you are traveling in group and use caution.

A little later we arrived at Larry’s Camp were we made a little stop. This is a nice-looking camp site next to the river. This is apparently the typical overnight place if you are doing the actual two day trip. At this point I was running low on food already. Luckily I had plenty of water with me. One of my friends was starting to get suspicious about this ‘we are getting closer’ nonsense. To my surprise, my other friend Hannah took charge and reassured them we were almost there. I don’t know if she was really thrilled to see this Mystic Pass or had even poorer map reading skills than I did that day but she convinced them to continue. We were climbing to an alpine meadow area now and start setting foot to a snow area.

We made another stop. We hadn’t seen a sign post in a while now. I started feeling guilty because I talked my friends into this but I didn’t feel like turning around now, we were so close, right ? Someone else who didn’t want to turn around was Hannah, she was determined we were only a few meters away from Mystic Pass. The other four weren’t too thrilled about the idea but Hannah her will was strong. And we gave it one more chance.

We reached an open land, it was getting pretty chilly now because of the altitude we reached and the wind that was gushing through this area through the mountains. A few steps further the snow was up to our knees. And that was the boiling point for two of our friends. Enough was enough. This was the end of the hike for them. Funny enough, we actually were at Mystic Pass but none of us realised it. The view of this place was grand and breathtaking though and well worth the effort.

We decided to turn around at this point. Still not realising we actually reached our goal we walked back, slightly disappointed and famished. The way back was smooth. We nourished ourselves with some leftover nuts and candy bars. We made it back to the Johnson Canyon parking lot right before dark. Thankfully the gift shop and restaurant were still open so we could grab some food and drinks.

Those friends never asked me about a hiking idea again. Ever. But they all agreed it was all worth it. Personally, I think a hike up to Mystic Pass is possible in one day if you just start early enough and make sure you have enough food and water with you. We just started the hike really late and were not prepared for this prolonged journey. So again, make sure you are always prepared for your hikes. Always better to bring a little more food than you think you need.

Mother nature went total karma on me for not being prepared for this hike. When I went back to Johnston Canyon in February I made a very ungraceful slip on the extremely slippery ice in front of a bunch of young kids. They laughed.