When people talk about US travel destinations they always think about Sunny California, Vibrant New York or Hurricane season in Florida.

But it’s clear to say the US has so much beauty captured in one country each with its own charms.

Oregon is filled with beautiful places.

Visit Corvallis and go strolling through the city center.

Jump into Crater Lake, one of the deepest lakes on earth.

Go try some beers in Portland

Make a stroll along the beach in Cannon Beach

Don’t hesitate – Crawl behind the wheel and take that drive.

You won’t be disappointed.

Just keep in mind that Oregon is one of the two states in the US where it is illegal to pump gas yourself. It’s one of those old laws  where the government decided it was not safe for customers to just get gas themselves. 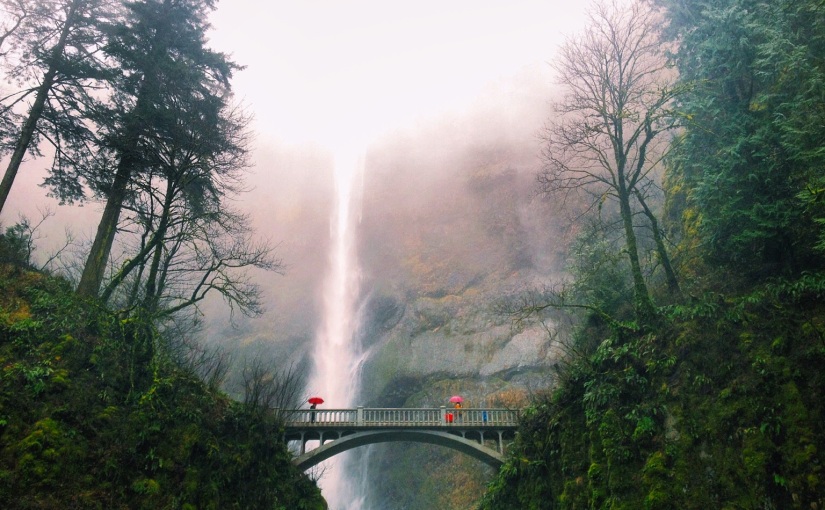 To embark on the journey towards your goals and dreams requires bravery.

To remain on that path requires courage.

The bridge that merges the two is commitment.

I saw Raine again at the airport of Seattle on a Thursday night in February.

She left the sunny weather from California behind and exchanged it for a rainy weekend in Washington State and Oregon.

From the airport we picked up our rental car and drove into the night down the Interstate 5 until we reached Vancouver, Washington State, right on the border with Oregon State and Portland. There we checked in to some local low budget hotel right off the interstate with free parking. This way we avoided the high hotel prices from Portland and an additional parking fee. Portland is only a half hour drive from there.

On Friday morning we entered Oregon.

But we didn’t drive to Portland right away.

Instead we decided to drive on one of the most scenic routes of the USA, The Historic Columbia River Highway. The scenic route starts in Troutdale and goes all the way to The Dalles. We were really excited to discover this stretch of awesomeness.

As soon as we left the Highway 30 it started to get foggy.

It was a curse and a blessing. The fog prevented us to look far around us and some lookout points we stopped at were just like we were staring at a blank wall like at Vista House.

But the fog on the empty road and between the woods made the experience so much more fun.

Until we got a flat tire.

We pulled over and evaluated the damage. We had to replace the tire with the spare donut we had underneath the car. After a little investigation and some good help of that one car that passed by and pulled over we got back on the road with only half an hour delay.

We had places to go that day.

Not much later we arrived at Latourell Falls and the fog disappeared for a bit. Latourell Falls is a little less popular then Multnomah Falls but definitely worth a visit. We hiked up to the top of the falls and enjoyed the stunning views along the way.

Not much later we arrived at the famous and marvellous ‘Multnomah Falls‘. Most of the visitors make the little hike up to the Benson Bridge which is pretty close. If you have more time and a little bit of hiking experience you can also continue the trail until the top. The view up there is magnificent and worth the effort, even if it is a series of switchbacks you are about to conquer for the next mile.

We made Multnomah Falls our turnaround point on our scenic drive and drove off to Portland for more adventures where we switched our rental car at one of our rental car offices without any extra charges and a new full tank !

When you decide to visit Portland you will quickly be introduced to the funky vibe that this city possesses and the most awesome thing you can do is embrace it with both arms.

Portland is a city for bikers and for people who adore books, music, bridges, beer and one way streets.

One of the main things to do in Portland is visiting the Powell’s City of Books, where you need a travel map to go from Archeology to Zen.

Make time for a stroll in Riverside Park along the Willamette River. If you walk passed the Burnside Bridge you’ll find the famous ‘Made in Oregon’ sign on your left.

If you are hungry from all the walking and you are up for a snack than you can get a doughnut in the popular ‘Voodoo Doughnut‘ place. You might have to wait in line for a bit until you can devour your piece of sugar.

Maybe you noticed it in the meantime… the state of Oregon has no sales tax which saves you some dollars on your shopping . Maybe a good time to by that new Iphone in the Apple Store in Portland.

For good food you can always try Kenny & Zuke’s and definitely try some local microbrews when you are in Portland. 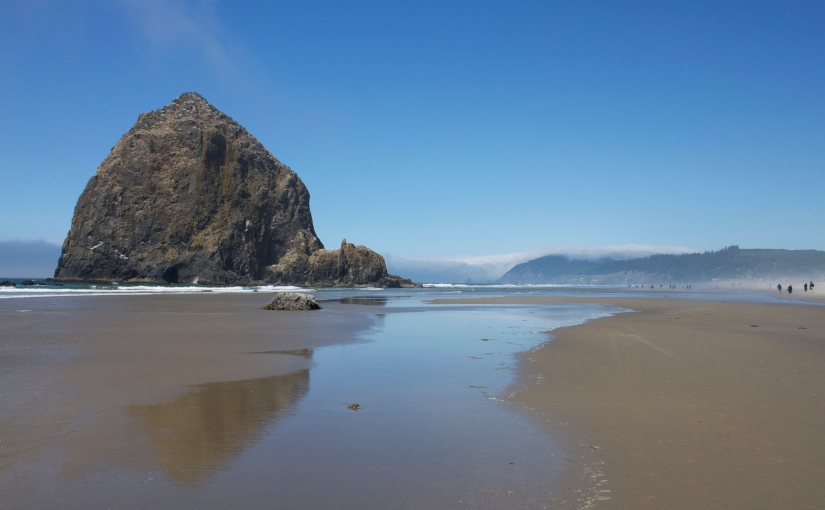 Everywhere is walking distance if you have the time.

One of my favourite parts of road tripping down the 101 is driving over the Astoria-Megler Bridge which connects Washington State (Megler) with Oregon State (Astoria). Tell your loved one in the passenger seat to keep the camera ready!

A little bit further down south you will arrive in another awesome spot, Cannon Beach. You most likely remember this beach from the end scene of ‘the Goonies’. Go to the beach, take off your shoes and enjoy a relaxing walk along the shore towards Haystack Rock. This enormous rock is accessible by foot at low tide during summertime. The first we visited Cannon Beach in July the weather conditions were perfect. The second year we went we missed that slot by far and got soaking wet in February instead. Still a fun and very natural experience. At least we didn’t have to roll up our pants anymore.

After our little walk, we basically almost drifted back to our lodge (Ecola Creek Lodge) to get a hot shower and jumped in the car to get some late night dinner. Because it was low season the town was quickly turning into a ghost town after 9 PM.

We lucked out and got a great meal at Bill’s Tavern & Brewhouse. They were very kind to get us some food right before the kitchen closed and we got a great service and good food !

From Cannon Beach most people travel east to see the area around Portland.

Those who want to keep going along the 101 will experience some wonderful ocean views along the way. You’ll also make some stops in Tillamook, Coos Bay or Oregon Dunes National Recreation Area to get a break from sitting behind the wheel.